Recently we received an email from a customer telling us that she is using Diatomaceous Earth to combat Vine Weevils. So we thought we would share some information about how to do this, since no doubt there are many others of you that have come across this problem. 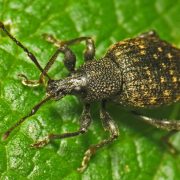 Vine weevils are beetles that cause terrible damage to plants, especially those grown in containers. The adult weevil only eats the leaves of plants so damage from them is generally not severe – it is the larvae that cause the problems. The adult lays her eggs on the soil around the stem of the plant, and then when they reach the larvae stage they bury themselves into the soil and begin to feed on the roots… A beautiful plant may look fine until it falls over and you see no roots left!

Vine weevils seem to be resistant to pesticides but you don’t need to get rid of all your plants –  there are plenty of ways to combat vine weevil.

You can dig around the base of your plants and look for the large, fat, white grubs. They are brilliant white in colour with a brown head, and approx. 1cm long, curled into a half moon.

Adults feed at night. During the day, they hide in soil cracks, garden debris and mulch, so remove these from around your plants.

Vine weevils and their grubs are eaten by a variety of predators such as birds, frogs, toads, shrews, hedgehogs and predatory ground beetles so create areas where these predators can thrive.

If they are a serious problem water your plants only when necessary as they prefer damp conditions.

These are living parasites that you water into the soil and they kill the vine weevil grubs. These apparently work very well but be aware that the soil must be at least 5 degrees celsius or the nematodes may die with the cold.

Sprinkling diatomaceous earth around the base of infested plants will safely and effectively control the larval stage of root weevils. Before applying the DE, it’s wise to put on protective eyewear, gloves and a dust mask. Keep pets and out of the area until the dust has settled. Grubs are generally present March – April (having over-wintered), or in September (having hatched from eggs laid during the summer.

DE contains NO toxic poisons and does not harm earthworms. Earth worms are structurally different from insects in that they can actually digest particles of DE. The particles are then eliminated in their castings. It does however affect bees and other insects so do not sprinkle over flowers and use it sparingly. It will need to be reapplied after a rain shower.

We sometimes have Special Offers and New Products that might interest you. If you would like to subscribe to our newsletter below we will not email more than once a month.
Non-toxic Cleaning Paste